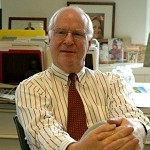 Rick Smith’s first job in New York was driving a taxi while a grad student at Columbia. A few twists in the road later found him at Newsweek magazine on something called a two-to-four week writing tryout. It apparently went well. Thirty-seven years later, Rick retired from the magazine after serving as Hong Kong Bureau Chief, Asian Editor, Editor of the International Editions and 23 years as Editor-in-Chief and 16 as Chairman and CEO as well. Along the way, Newsweek won a host of national magazine awards, recorded some of the most profitable years in its history, and introduced seven foreign-language editions. For his efforts, Rick earned the magazine industry’s highest honor, The Henry Johnson Fisher Award for Lifetime Achievement. He joined the Pinkerton board in 1995, and after a few years of site visits to programs supported by the Foundation, he pronounced the director’s job “the best job in the world.” A decade later, the board remembered his comment. He became Pinkerton’s President in 2010. Rick is also non-executive Chairman of Merryck & Co. Americas, a leading CEO mentoring firm, and a board member of the Forestar Group and of Videolicious.com, a technology startup. In addition, he’s a member of the Council on Foreign Relations and on the board of visitors of the Columbia Graduate School of Journalism and the international board of the Harvard AIDS Initiative.  He is married to Dr. Soon-Young Yoon, a medical anthropologist who consults with the World Health Organization and other international agencies. She is the chair of NGO/CSW, a U.S.-based group that supports the work of the U.N. Commission on the Status of Women. 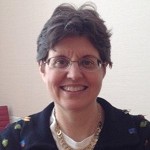 Laurie Dien grew up in St. Louis with dreams first of designing toys and later entire playgrounds. She went on to earn a B.A. from Barnard and a Ph.D. in environmental psychology from the CUNY Graduate School. Only then did she realize that her true motivation was a desire to improve the lives of young people in general. That led her to the Hasbro Children’s Foundation and ultimately to The Pinkerton Foundation in 1997. More than a decade ago, Laurie was instrumental in the founding of the Career Internship Network, a source of education and professional development opportunities for organizations that offer internships to thousands of high school students each year. She continues to have a special fondness for programs that provide career exploration for all young people and education and employment opportunities for those who are out of work and out of school. Laurie is also one of the architects of the Science Research Mentoring Consortium.  Currently in its third year, the initiative—now known as the Pinkerton Science Scholars Program—offers intensive science training and one-on-one mentoring in an authentic laboratory research project to talented high school students from disadvantaged backgrounds. That’s a long way from the toy box (or the sandbox, for that matter), but we see evidence every day that Laurie’s still having a lot of fun. 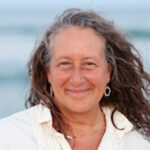 Since 2013, April Glad (Julie Peterson before a name change in 2019) has brought vision and commitment to Pinkerton’s portfolio focused on youth and family justice.  The array of organizations demonstrates her broad commitment to leaders of color and those with direct experience in and around the youth justice system. Educated at UCLA, Cornell (B.A.) and Harvard (law), April’s career has spanned a role managing Poor Little Rich Girl, a store in Beverly Hills where she attended high school, to monitoring conditions of confinement at Rikers Island for the federal court in1992, her first job in New York.  Since then, in between robust consulting gigs for clients in the nonprofit, philanthropic and government sectors, April has been a program officer at the Edna McConnell Clark Foundation and the Director of Public Private Initiatives at the NYC Department of Probation.  As the Rev. Dr. Alfonso Wyatt, elder statesman of youth development in NYC, says fondly, “Everyone needs an April.”  At Pinkerton, we are delighted to have the original. 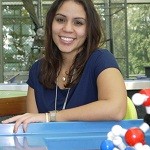 Jenny has a unique perspective on the value of Pinkerton grants. In 1998, three days after graduating from New York’s high school for pregnant and parenting teens and six weeks after the birth of her son Joel, she went to work as an “Explainer” in the Science Career Ladder program at the New York Hall of Science–a longtime Pinkerton grantee. During her tenure there, she rose to lead the program while earning degrees from LaGuardia, Queens, and Baruch College. She brought her interest and expertise in youth programs and STEM education to Pinkerton in January of 2012. The first proposal she reviewed was for the NYC STEM Education Network, a coalition of organizations working to provide STEM learning opportunities for all. Jenny has been recognized as a Next Generation Getty Leadership Fellow and a Rockwood Equity in Philanthropy Fellow. She currently serves on the STEM Funders Network executive committee and the Philanthropy New York board. Joel was an Explainer himself and in Spring of 2022 graduated from Hunter College, marking that the fifth CUNY degree earned between the two of them (he also graduated from Guttman). Longtime Pinkerton-watchers will note that until exchanging vows with her beloved Anthony on September 18th, 2016, Jenny was known as Jennifer Correa. (We like her by any name.) 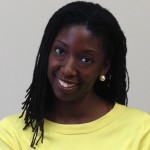 After graduating from Brown University with a degree in computer science and management, Danielle Pulliam began her career at Andersen Consulting (now Accenture).  While there, Danielle found that her pro-bono work was much more rewarding than projects for paying clients.  Her bosses might not have been delighted, but it fueled her interest in public service. She joined the Stanley Isaacs Neighborhood Center (a long-time Pinkerton grantee) and then the United Way, where she earned an MPA from Baruch College through the National Urban Fellows Program.  Later, she worked with Public/Private Ventures and Local Initiatives Support Corporation (LISC).  Before joining Pinkerton, Danielle was the director of Strategic Partnerships in the Office of Adult and Continuing Education at the New York City Department of Education. At Pinkerton, Danielle manages grants to literacy, sports, and arts programs and serves as a thought partner for the foundation’s Racial Equity Initiative to support BIPOC leaders. She is also co-chair of the New York City Youth & Education Funders Working Group and is active in Grantmakers for Education. Outside the office, she finds joy in practicing her faith and liturgical dance, traveling internationally, and enthusiastically sampling the world’s cuisines. 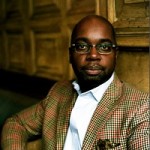 Erickson Blakney presented himself to the foundation with an impressive background as an award-winning writer, reporter and interviewer for Bloomberg and CBS News. Now those career skills are all important for a successful program officer, but it was his extracurricular activities that set EB–as everyone calls him–apart.  After graduating from Hobart College, he did an early career stint at the Daytop Village substance abuse treatment program and later earned a certificate in nonprofit management from CUNY’s Hostos College. While working in journalism, he joined the board of the DreamYard Project, a longtime Pinkerton grantee in the Bronx. That was 16 years ago, and he remains a thoughtful, engaged and effective board member.  EB’s philanthropic interests range far and wide. He’s on the board of the Clarksdale Animal Rescue Effort and Shelter in Clarksdale, MS, and The Center for Rural Strategies in Whitesburg, KY. In northern Ohio, where he grew up, he is a trustee of The Needmor Fund, a philanthropic organization that supports grassroots groups working to bring about social and economic justice. In his spare, spare time, EB has also produced documentary films on the Mississippi Delta’s blues tradition and fair housing policies, but that’s another story. Feel free to ask him. 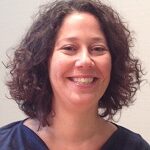 Jill Bregenzer came to the foundation in 2011, fresh from her first year as the Treasurer of the PTA at  P.S. 40 in Manhattan. She had a few other relevant credentials as well. Before taking time off to be with her two young daughters, Jill served for twelve years at PricewaterhouseCoopers. At PwC, she was a Senior Audit Manager on a number of major domestic and international accounts, and a Human Resources Manager working on compensation and training matters.  (We found her undergraduate history as a toll taker for the New York State Bridge Authority intriguing, but somewhat less relevant.) Jill graduated from Union College and received an MBA from the William E. Simon Graduate School of Business at the University of Rochester. Her background is perfect for a Jill-of-all-trades role at the Foundation that includes being chief financial officer and a one-woman human resources department, but it’s her enthusiasm for the programmatic work of the foundation that makes her so special. In addition to her other responsibilities, Jill now also manages a small portfolio of grantee organizations. 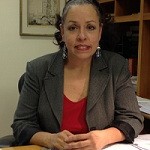 Yvonne Schonborg, a Bronx native and die-hard Yankees fan, has served in the finance and management sectors for thirty-eight years. Recently, she has successfully installed the Foundation’s new grants management software, ensuring that it serves program officers, grant applications and, of course, the auditors as well. Yvonne manages the Foundation’s books, turns board decisions into documents (and grantee checks) and generally keeps the office humming. A graduate of National University in San Diego, Yvonne served for fifteen years at HomeFed Bank in California where she was an IT business and data analyst, branch manager and operations supervisor. In 1997, she returned to New York and became the business manager for the Reformed Church of Bronxville and assistant executive director for Beneath the Sea in Westchester. Yvonne joined the Foundation in 2009 and also served as the controller and human resources administrator for the Ann Pinkerton Charitable Trust. 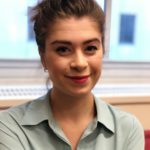 We didn’t know we were looking for a receptionist who combined an interest in evolutionary biology with a passion for puppetry, but when Morgan Daniels came in for an interview that’s precisely what we found. (The offspring of her twin enthusiasms: a fuzzy Muppet-like amoeba named Eric.)  Perhaps slightly more relevant, Morgan is in the great tradition of past Pinkerton gatekeepers—a winning, welcoming presence to all who call or visit the foundation. The dual-citizenship daughter of a British naval officer and an American from Virginia, Morgan grew up in England and graduated with a degree in sociology from the London School of Economics. After a stint working with actors and comedians at a U.K.-based talent agency, she decided that she wanted to try life in the nonprofit, direct-service world—and that New York was the place to do it. We expect to have to work on her spelling a bit (labour, honour, centre, etc.), but we are looking forward to learning what graduating with “upper second-class honours” actually means. Above all, we are delighted that she crossed the pond to our shores.